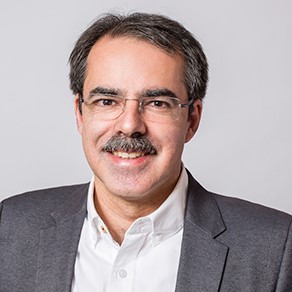 Michael Hintermüller has been Director of the Weierstrass Institute for Applied Analysis and Stochastics (WIAS) and holder of the Chair of Applied Mathematics at the Humboldt-Universität (HU) zu Berlin since 2016.

For many years, Michael Hintermüller has played a major role in shaping the international math hub of Berlin. For example, he assumed the role of Spokesman of the Berlin Mathematics Research Center MATH+, a Cluster of Excellence, in 2019. The mathematician acted as Spokesman of the Einstein Center for Mathematics Berlin (ECMath) from 2016 to 2019. He joined HU Berlin as a Matheon Research Professor in 2008, and was appointed Member of the Council of the DFG Research Center Matheon in 2011.

The Austrian mathematician has received multiple awards for his scientific achievements. He is a Fellow of the prestigious SIAM (Society for Industrial and Applied Mathematics), and received the Start-Preis – Austria’s most prestigious award for young scientists – in 2005.

He is also chairman of the scientific advisory board of the Leibniz Institute for New Materials (INM).